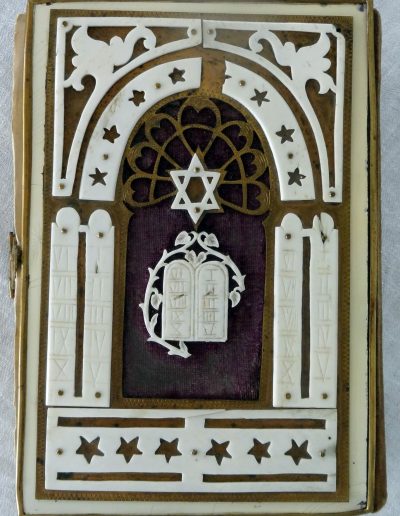 Ashkenazi and Sephardic Jews represent two subcultures in Judaism, which differ in some elements in the practice of rite and in traditions. The articulation of vowels in Hebrew when reading biblical texts is different, but most Ashkenazi took over the Sephardic pronunciation, which had become the variant adopted for modern Hebrew in the State of Israel. The language of the Ashkenazi is Yiddish, a mix of medieval German, Hebrew, elements borrowed from Slavic languages and others, written in the Hebrew alphabet. The number of Yiddish speakers has dropped enormously due to the Holocaust, but Yiddish continues to be a living language, used mainly in ultra-Orthodox communities. Ladino or Judeo-Spanish, a language derived from Old Spanish with many elements from other Romance languages, is in danger of extinction. The Ashkenazi descend from Jews in France, Germany and Eastern Europe, the Sephardim from Jews in Spain, Portugal and North Africa.

In Timisoara, the first Jews were originally from Thessaloniki, Constantinople and cities in Hungary, descendants of the Sephardim expelled from Spain in 1492. Already in the first half of the eighteenth century we find two communities, Sephardic and Ashkenazi. Since 1870, they have operated under the same community status, but have administered their synagogues separately. Fewer, the Sephardic in the Citadel under the presidency of Gyarmathai Israel Derera merged with the Ashkenazi in 1899, while the Sephardic community in Fabric, which had separated from the Citadel in 1861, continued to exist until after World War II.

Another branch of the Jewish cult has its roots in the Enlightenment in the eighteenth century, when the critical approach to biblical texts produced Haskalah, a reforming movement in Judaism. At the Congress of Jewish Communities in Hungary and Transylvania in Pest (December 1868-February 1869), Ashkenazi Judaism split into two currents, the Orthodox and the Neolog, to which will be added, from 1877, the status quo ante. The Orthodox strictly observe the religious rite; Neologs introduce reforms that mitigate the rigor of liturgical rite and traditional customs; the status quo ante opts for the pre-split situation, a middle ground.

In Timişoara there are 5 communities: one neolog in the Citadel, two Orthodox (one in Josephine, the other in Fabric), a status quo ante in Fabric, which, in the 1920s, became a neolog, and the Sephardic. In 1933, the communities from Citadel and Fabric were united. In 1936, the Federation of Unions of Jewish Communities in Romania was established, based in Bucharest, in which the “western rite” communities are represented, the name used for the reformist ones, as well as the more traditionalist, “orthodox” communities. Currently, the F.C.E.R. (Federation of Jewish Communities in Romania - Mosaic Cult) brings together all communities in the country, and in Timisoara there is only one community.

Who is a Jew? David Ben Gurion, the founder of the state of Israel, invited 50 intellectuals from around the world to answer this question. He received so many different answers! According to Halaha, Jewish law, a Jew is one born of a Jewish mother, whether or not she practices the religious rite, whether she is a believer or not. The Jew is also the one who converts to Judaism. According to the racial laws of Nuremberg, the plan of persecution and extermination included people with one of the four grandparents of Jewish origin. As a result, the "Law of Return", passed in 1950 by the Israeli parliament, gives the right to citizenship to those who have a Jewish mother or Jewish ancestry. In reformist communities the emphasis is on self-definition. Some define themselves as Jews by faith, others by attachment to tradition, historical and cultural heritage, or by a sense of belonging to the Jewish destiny.

After the Second World War, the synagogue, like Bet Kneset, "house of assembly", was a place of prayer and also a platform on which the Jews of Timișoara met to talk about family and friends, about Israel and the prospect of emigrating. In an atmosphere of family reunion. From the beginning of the twentieth century to the present day, in the community of Timişoara Jews of predominantly neologism, religiosity has sublimated in a lasting connection woven by tradition and the common past, celebrated with emotion in the synagogue and at festive events.