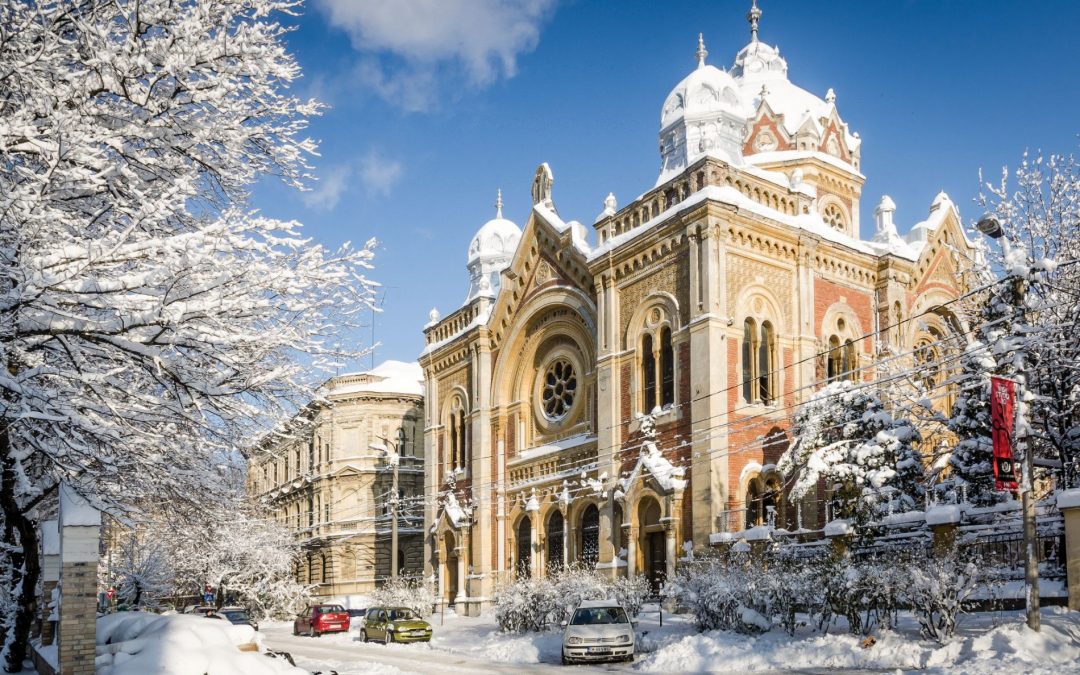 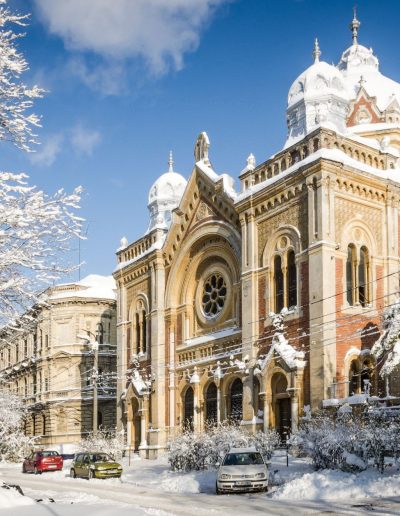 The growing status quo ante community in Fabric, at the end of the 19th century, decided to build a temple according to its size and position, as the synagogue built in 1838 had long since become too small. It was located on Splaiul Kunz, on the banks of the Bega canal, next to the Archduke's House, built in the period after 1868, and the Josef Kunz Palace (1892), which was "the symbolic monumental gateway to the Fabric district" (Opriş & Botescu, Historical architecture from Timişoara, 2014). The Bega Canal passed in front of them, and on the route to the Citadel, at the end of the century, there were no constructions on a large surface. It was not until the first decade of the twentieth century that palaces began to rise, one after the other, at a frantic pace. In 1907-1910, the canal was covered and became a street, and in 1910 the Decebal Bridge (Liget-úti hid) was built.

"The project is superb," wrote a journalist who had attended the presentation of the architect Lipót Baumhorn in the Temesvarer Zeitung on November 28, 1896. The building will be imposing, he was excited, with 400 seats (eventually there will be 700), with a splendid facade, a high dome and two towers, and will be one of the most special architectural ornaments of the city of Timisoara. Delighted by the plan, the Jews of Fabric formed a temple construction committee, chaired by David Blau, an alcohol maker. A major role was also played by Sándor (Alexandru) Kohn, the sales representative and lawyer of the brick company Kunz and Partners, as well as Miksa Steiner, the owner of a lye factory. At the urging of the first chief rabbi of the community, Bertalan Kohlbach, Amália Freund donated the value of half the land on Splaiul Kunz in memory of her husband Lipót Freund. On June 1, 1902, a plaque was unveiled in the nave of the temple in her honor and that of the former president of the Jewish community in Fabric, Bernát Deutsch, who had moved to Arad, where he was elected head of the Arad Israeli community. The plaque was recently moved to a wall in the courtyard of the Community headquarters, the entrance from Mărăşeşti Street no. 10. 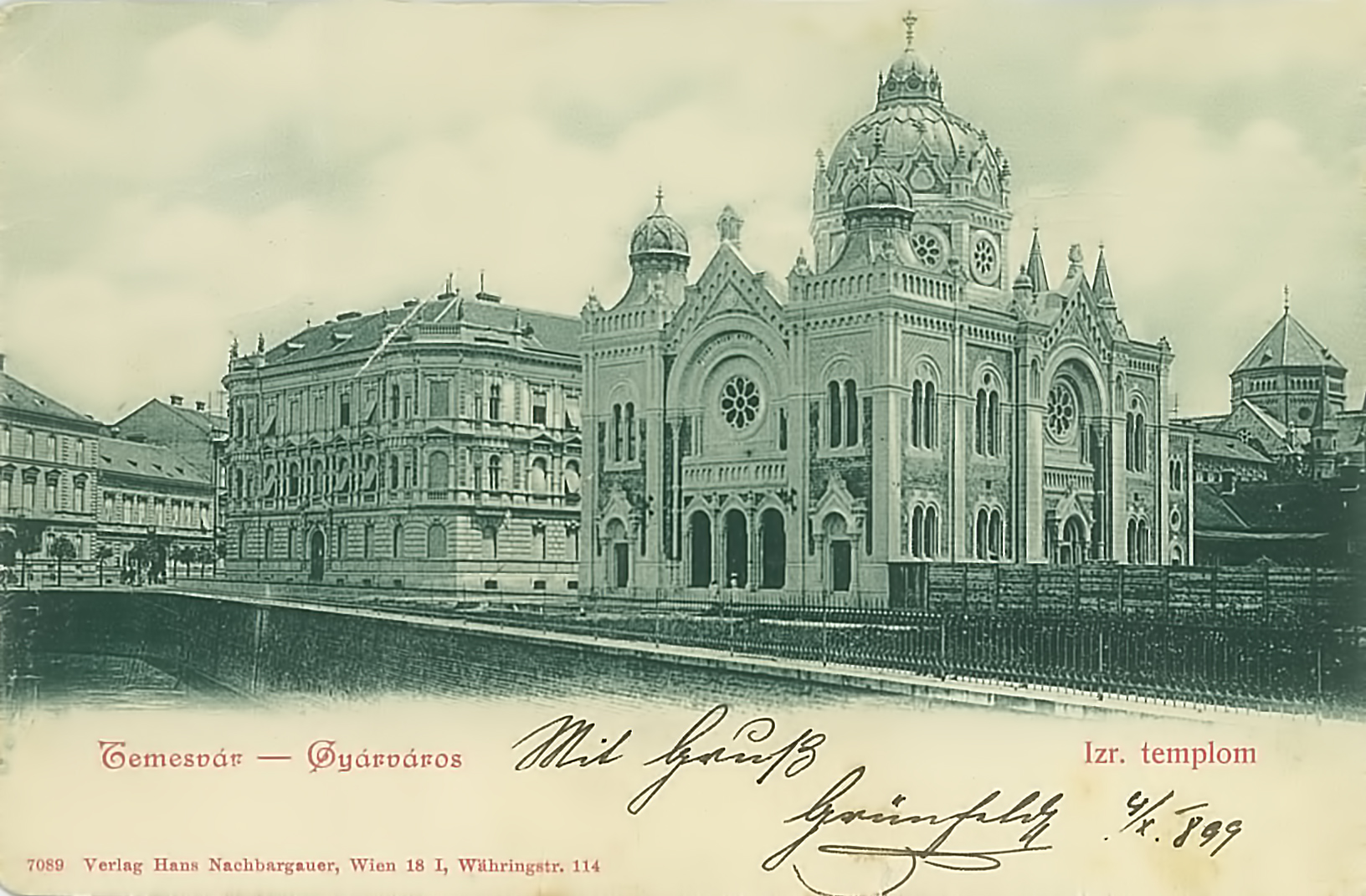 Synagogue on the banks of the Bega canal. Illustrated, 1899

It is interesting that part of the financing of the construction was covered by a lottery organized by the City Hall. The amount, 6,000 crowns out of a total of 162,000, the figure mentioned in the estimate, represented less than 4% of the cost, but symbolized goodwill and good understanding. The imposing, independent building, located in a prominent place, was called "New Synagogue", to distinguish it from the old synagogue on Timocului Street, and not, as stated in some works, a synagogue that would have existed already on Splaiul Kunz. The land on the edge of the neighborhood separated from the Citadel by the esplanade where construction was prohibited had been purchased for the purpose of this construction.

The inauguration ceremony was set for September 3, 1899, on Monday evening, the day before the eve of Rosh Hashanah, just as the inauguration of the Citadel Synagogue and the inauguration of the Josephine Synagogue took place in 1895. The congregation was filled with exhilarating joy. Speakers included Dr. Jakab Singer, the successor of Rabbi Bertalan Kohlbach, who had left office in 1896, and Mayor Carol (Károly) Telbisz, who led Timisoara City Hall for almost three decades (1885-1914).

Architect Lipót Baumhorn was the most sought-after synagogue architect in Hungary. He knew how to respond with common sense and creative imagination to the demands of a community that wanted, in a modern spirit, a bright and friendly place of prayer. The synagogue, spectacularly beautiful, gives off an impression of balance and harmony through symmetries and an orderly structure and a feeling of welcoming warmth through the play of curved and broken contours, various materials and colors, through stained glass and rich ornamentation.

Two rabbis officiated in this synagogue, Rabbi Dr. Jakab Singer and, from 1941, Rabbi Dr. Ernest Neumann until 1990. At first belonging to the current status quo ante (see Religious Life, Jews in Timisoara), the community joined in the year 1920 of the neological current in the Union of Neological Communities from Transylvania and Banat. Notable singers of a high artistic level gave brilliance to the religious service - Jakab Friedmann, Jenö Weiss, Otto Feller, Geza Klein, Ernest Kohn, Hugo Fischer and others, accompanied by organist Andor Friedmann, later Gheorghe Klein, and the choir Hazamir under the leadership of the talented Samuel Fischer. During the war, after the confiscation of the school headquarters, the courses of the Israelite High School continued, for a time, inside the synagogue.

At present, the synagogue arouses admiration and at the same time a great concern in the face of its advanced state of degradation. In the 1990s, it was claimed that the wooden structure that supports the roof was attacked and destroyed by a fungus, a diagnosis denied a few years ago. The synagogue was closed, and the divine service took place in the neighboring prayer house, with an entrance from the courtyard of the synagogue, which had served in the early twentieth century as a seat for general meetings of the leadership of the community of Fabric. The damage continued, the roof was no longer watertight, one floor collapsed. In 2006, in a generous gesture of solidarity, the Metropolitan Church of Banat financed roof repair and insulation works. Since then dates the silver color of the dome, which does not correspond to the original appearance.

In 2009, due to lack of funds for restoration, the Community ceded the synagogue for a period of 35 years to the National Theater in Timisoara, provided it was renovated in the first seven years. Repair works were carried out and a project was elaborated in order to transform it into a performance hall, but the necessary funds for restoration were not gathered. A perfect architectural work, a synagogue built to last for hundreds of years, is in danger of becoming a ruin. In 2020, the synagogue passed into the administration of the City Hall, which intends to convert it into a performance hall.

Source: Getta Neumann, In the footsteps of the Jewish Timisoara. More than a guide. Brumar Publishing House, 2019 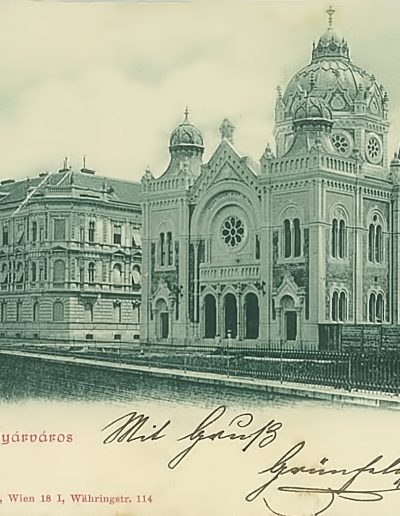 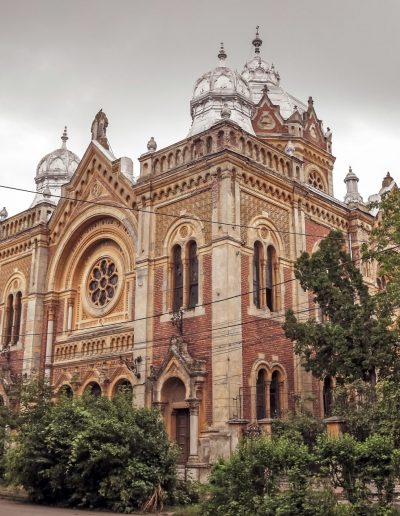 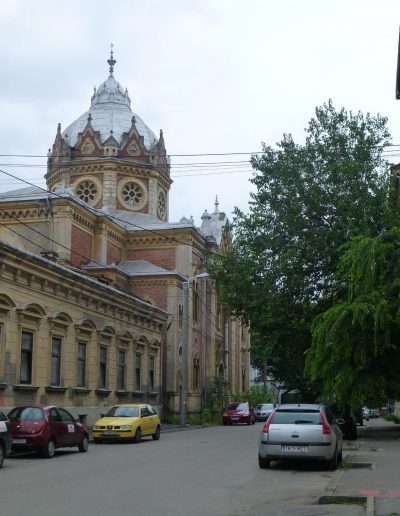 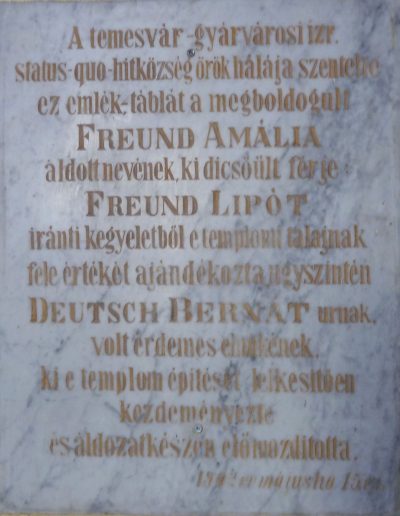 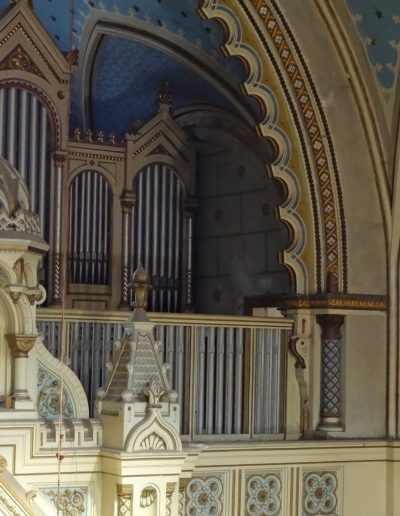 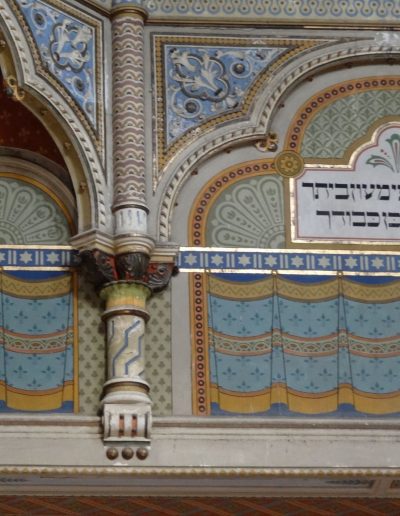 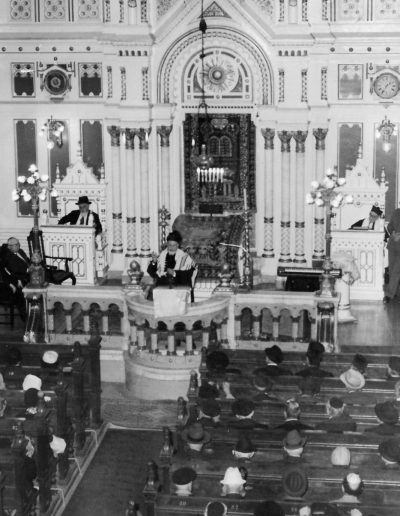 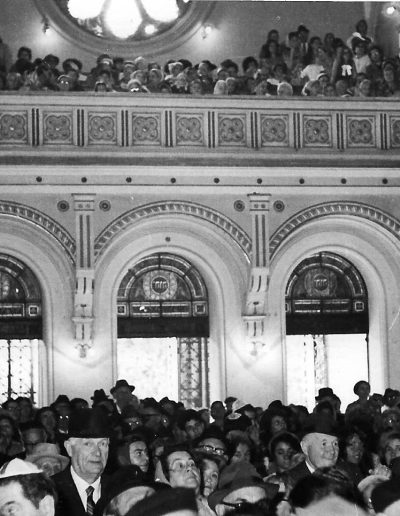 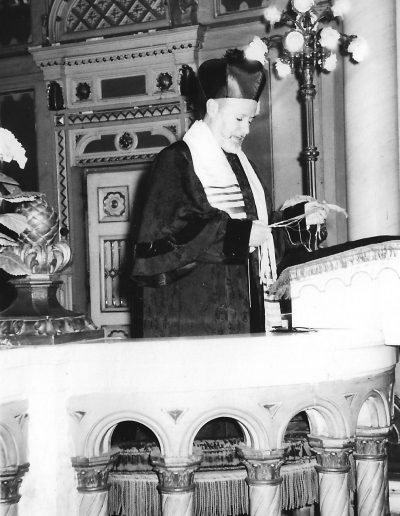 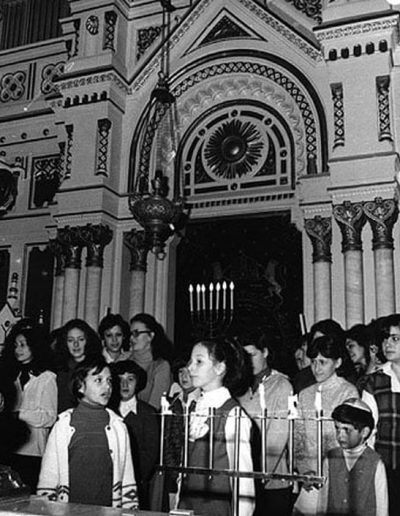 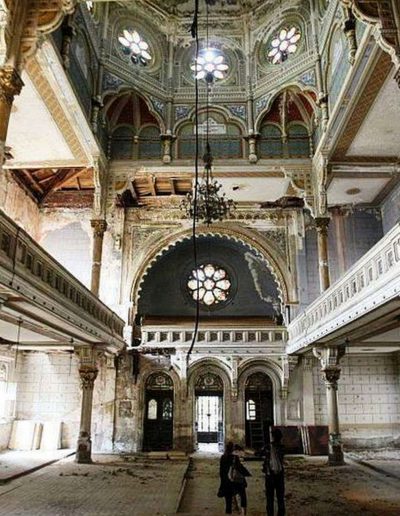 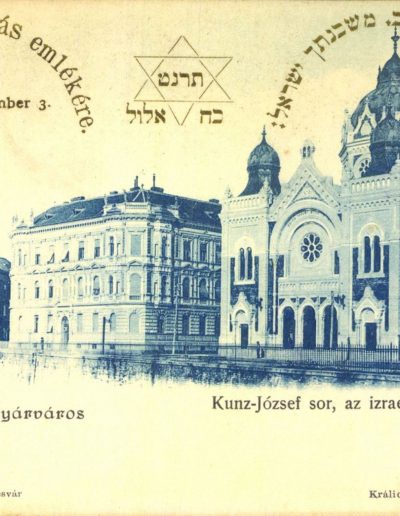 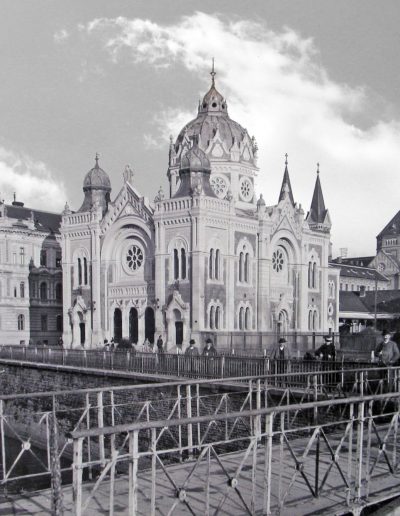 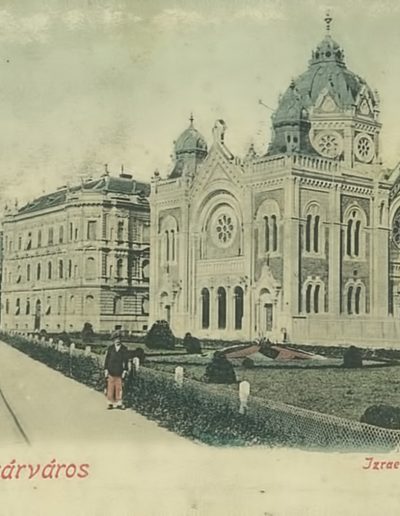 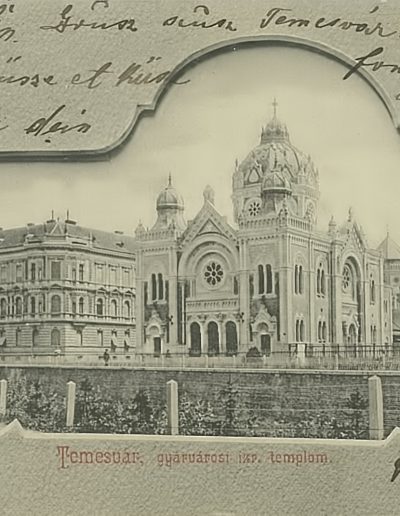 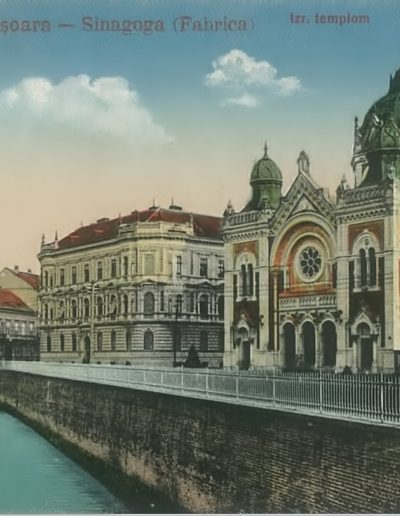 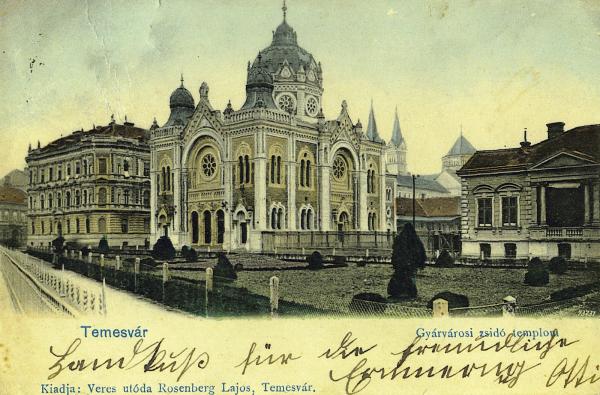 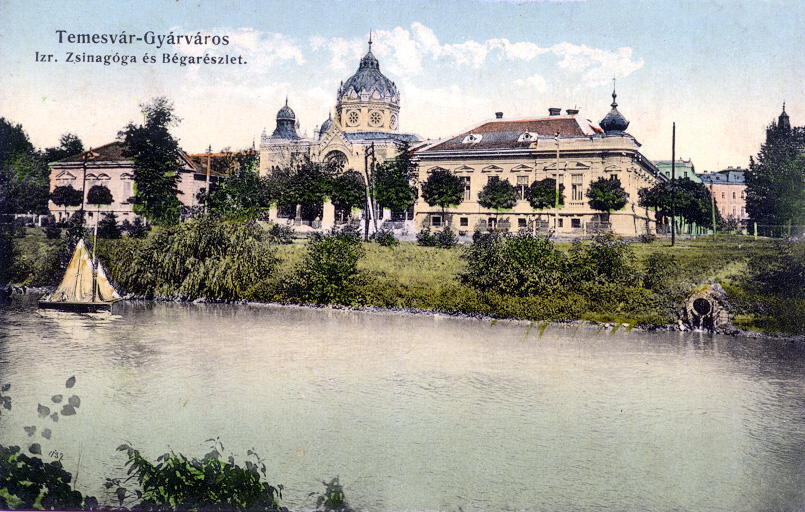