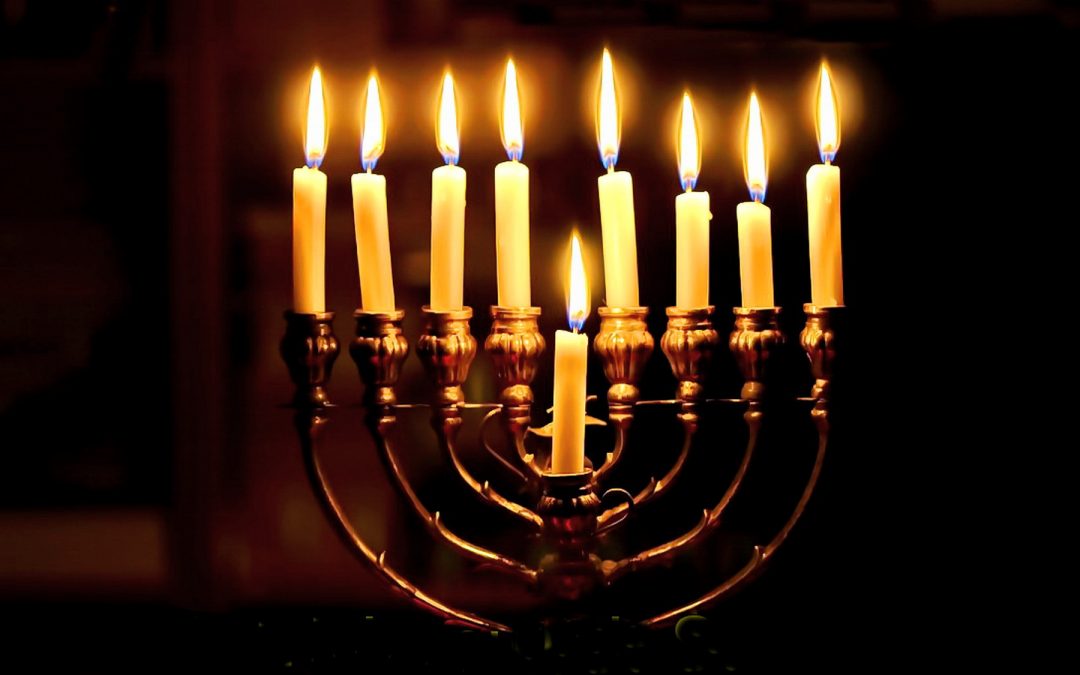 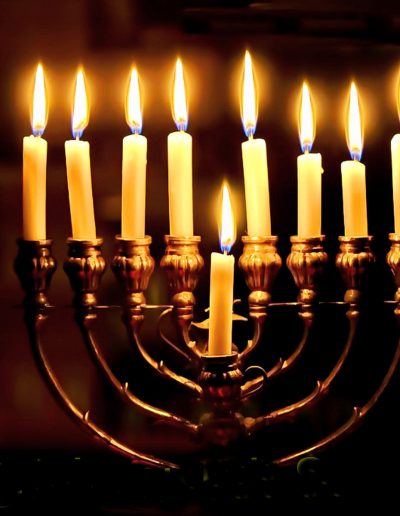 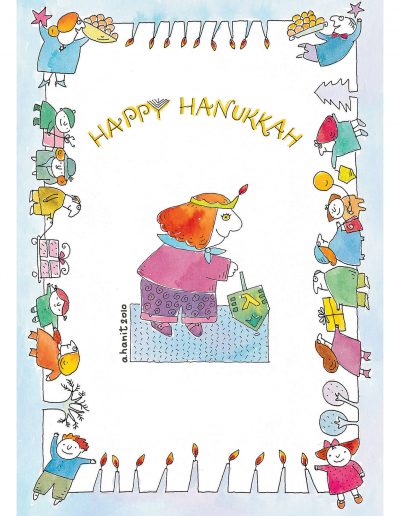 On the greeting card drawn by Anath Hanit are gathered some symbols of the holiday: candles, dreidl (whirligig), donuts and gifts.

In 198 BC Palestine was occupied by the Seleucid Empire, a Greek-Macedonian state, established after the collapse of the empire of Alexander the Great (4th century BC). At first, the Seleucids ruled as a soft power, tolerating local customs and religion. The situation changed radically with the ascension to the throne of Antiochus IV Epiphanes (called by some Epimanes, „the madman”) who launched a campaign to oppress those who practiced the Jewish religion. Those who refused to eat pork were killed, circumcision was forbidden, the temple was defiled. It was an attempt to Hellenize the population, Greek culture being considered a universal canon. The population rebelled against Antiochus Epiphanes, but also against the assimilated Hellenized Jews. The leaders of the revolt were old Matitiahu and his five sons, Johanan, Simeon, Eleazar, Jonathan and Judah Maccabeus (the one with the hammer). In 164 B.C. Judah Maccabeus conquered Jerusalem and the temple was consecrated again, an event celebrated for eight days.

The two books of Maccabees, written in Hebrew, have reached us only in the Greek translation. Historical facts are told, but there is no talk of the feast of lights, nor of the miracle of the oil vial that burned for eight days, although the oil was enough for just one day. The rabbis did not include the books of Maccabees in the biblical canon.

The Hanukkah holiday is described in the Talmud, with an emphasis on the miraculous aspect and not on the military victory. From the accounts of Josephus Flavius we learn of the victory of Judah Maccabeus and the festivities that lasted eight days.

The interpretations of the holiday are multiple, not in vain it is said "2 Jews, 3 opinions". Does Hanukkah celebrate the revolt against tyranny, against religious oppression? The struggle to preserve the national identity threatened by the Seleucids? Does Hanukkah celebrate the victory of the traditionalists over the Hellenized Jews after a civil war? Or the miracle of the flame that burned for eight days instead of one day?

In the twentieth century, the story of the Maccabees' struggle to defend their national and religious identity became one of the founding myths of the state of Israel, part of the national narrative. Symbolically, the history of the Maccabees is a reminder for the Jewish people to preserve their identity by respecting tradition and rules of conduct. It also teaches us that, in certain circumstances, rebellion is necessary. The Hanukkah light is the light of reason, of victory over obscurantism. She is also a source of faith, optimism, confidence in the future, she is the sparkle in the eyes of children when they listen to the story of the Maccabees and sing Maos Tur. In many cities of the world, candles are lit in a huge hanuchia located in a main square, in full view of everyone, with the pride of belonging to the Jewish people.

Hanukkah is celebrated in the family and in the community with songs (Maos Tur and others) and games (eg the game with dreidl). Children receive Hanukkah Gelt (a small amount of money) and gifts. Traditional dishes are latkes, a mixture of grated potatoes, onions and fried eggs in oil and suvganiot, donuts with jam filling.